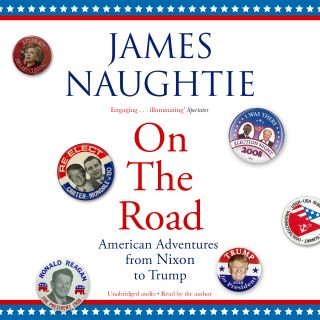 Adventures from Nixon to Trump

'A revealing and at times spellbinding tapestry of a nation...It is thought-provoking, constantly surprising and hugely entertaining. Sublime stuff.’ Michael Simkins, Mail on Sunday
'An insightful account of living through momentous times...much to enjoy in Naughtie's astute memoir.' Martin Chilton, Independent

James Naughtie, the acclaimed author and BBC broadcaster, now brings his unique and inquisitive eye to the country that has fascinated him and drawn him across the Atlantic for half a century. In looking at America, from Presidents Nixon through to Trump, he tells the story of a country that is grappling with a dream. What has it come to mean in the new century, and who do Americans now think they are?

Drawing on his travels and encounters over forty years in the ‘Land of the Free’, On The Road is filled with anecdotes, memories, tears and laughter reflecting Naughtie’s characteristic warmth and enthusiasm in encountering the America of Washington, of Broadway, of the small town and the plains. As a student, Naughtie watched the fall of President Richard Nixon in 1974, and subsequently as a journalist followed the story of the country – its politicians, artists, wheeler-dealers and the people who make it what it is, in the New York melting pot or the western deserts. This is a story filled with encounters, for example with the people he has watched on every presidential campaign from the late 1970s to the victory of Donald Trump in 2016.

As the 2020 presidential elections are well underway, Jim sees for himself how the main contenders are campaigning. He sees, also, how POTUS himself is dealing with impeachment proceedings, and what the ordinary citizen thinks of it all.

James Naughtie:
James Naughtie, special correspondent for BBC News, is one of the country's best-known broadcasters. He presented Today on Radio 4 for 21 years, and has reported for the BBC from around the world for more than three decades. Alongside his journalism he has wide cultural interests, and has written and produced many documentaries on music and books, and presented concerts from across Europe for radio and television. On Radio 4, he has hosted every edition of Bookclub since it began in 1998.