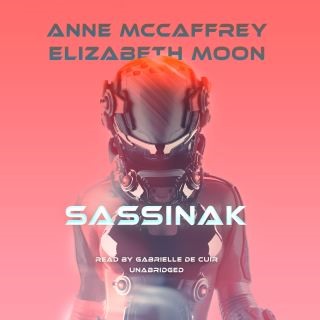 Sassinak was twelve when the raiders came. That made her just the right age: old enough to be used, young enough to be broken. Or so the slavers thought. But Sassy turned out to be a little different from your typical slave girl. Maybe it was her unusual physical strength. Maybe it was her friendship with the captured Fleet crewman. Maybe it was her spirit. Whatever it was, it wouldn’t let her resign herself to the life of a slave. She bided her time, watched for her moment. Finally it came, and she escaped.

But that was only the beginning for Sassinak. Now she’s a Fleet Captain with a pirate-chasing ship of her own, and only one regret in her life: not enough pirates.

Anne McCaffrey (1926–2011), one of the world’s most popular authors, was best known for her Dragonriders of Pern series. She was the first woman to win the two top prizes for science fiction writing, the Hugo and Nebula awards. She was inducted into the Science Fiction Hall of Fame, and was named a Science Fiction Writers of America Nebula Grand Master. Born in Cambridge, Massachusetts, in 1926, McCaffrey relocated to Ireland in the 1970s, where she lived in a house of her own design, named Dragonhold-Underhill.

Elizabeth Moon, a former marine, is the author of many novels, including the Vatta’s War and Vatta’s Peace series and the Deed of Paksenarrion, as well as the Nebula Award winner The Speed of Dark and Remnant Population, a Hugo Award finalist. After earning a degree in history from Rice University, she went on to obtain a degree in biology from the University of Texas, Austin.