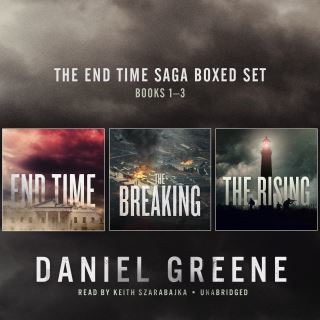 End Time, The Breaking, The Rising, and “The Gun”

In the dark primal jungles of the Congo River Basin, a deadly microbe is mutating at breakneck speed. Before the world can react, a deadly viral outbreak is ravaging the local populations. A team of counterterrorism agents is sent to retrieve a doctor in the collapsing nation … but this is just the knock on the door for the end of the world.

Over the course of a few months, along with the rest of the world, America collapses piece by piece turning the nation into a grim wasteland where the chances for survival are slim. Watch your six with counterterrorism agents as they try to keep a doctor and each other alive. Join a team of CDC doctors as they race to find a cure and the virus picks them off one by one. Scramble with a retired Air Force colonel thrust into the command of a Special Forces team trying to prop up a dying government. Flee before a delusional pastor and his followers as they burn their way across the land. Rebel with a rural town about to become the epicenter of a resistance movement and the return of a farmer’s daughter, propelled into a position to lead them.

Who will rise? Who will fall? The only certainty is the dead will rule over all. Enter: the End Time Saga.

Books included in this boxed set:

Daniel Greene is the award-winning author of the End Time Saga. He is an avid traveler and physical fitness enthusiast with a deep passion for history and is inspired by the works of George R. R. Martin, Steven Pressfield, Bernard Cornwell, and George Romero. Although he is a Midwesterner for life, he now lives on the East Coast.