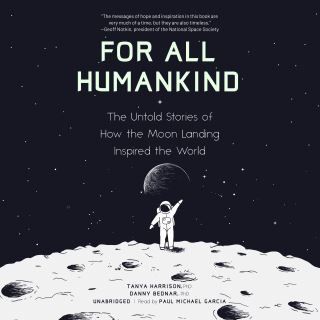 The Untold Stories of How the Moon Landing Inspired the World

July 20, 1969. Astronauts Neil Armstrong and Edwin “Buzz” Aldrin left humanity’s first footprints on the Moon. The plaque they left behind reads, “Here men from the planet Earth first set foot upon the Moon, July 1969, A.D. We came in peace for all mankind.” But was the Apollo 11 moon landing mission really a global endeavor? How did people outside the United States view these “rocket men”?

Against the political backdrop of the Cold War between the US and the Soviet Union, was it, indeed, “For all mankind”? Dr. Tanya Harrison has talked to individuals from a variety of locations outside the United States, to see how this event touched the lives of people across the world.

The previously untold stories in For All Humankind reveal the impact of the moon landings around the globe, and what having a “man on the moon” meant to the international community. Listeners will

hear interviews with eight non-Americans to get their perspectives,be inspired by their memories of the event as they saw it, and have a unique opportunity to learn more about one of the most historic events in human history.

If you liked A Man on the Moon, Rocket Men, and First Man, you will love this insightful book.

Dr. Tanya Harrison has spent over a decade working as a scientist and in mission operations on multiple NASA Mars missions, including the Curiosity and Opportunity rovers. She holds a PhD in Geology from the University of Western Ontario, a master’s in Earth and Environmental Sciences from Wesleyan University, and a BSc in Astronomy and Physics from the University of Washington. Currently she is the director of research for Arizona State University’s Space Technology and Science (“NewSpace”) Initiative.

Dr. Danny Bednar is a geographer of space, with an interest in how satellites are helping in the fight against climate change. He has worked on policy programs and rover-training missions with the Canadian Space Agency and has taught Space Exploration at Western University in Canada since 2012.