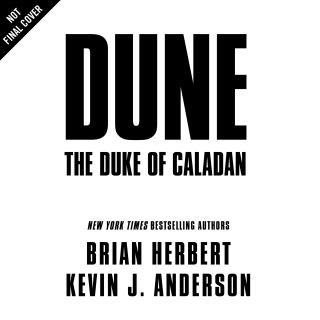 Dune: The Duke of Caladan

A legend begins in Dune: The Duke of Caladan, first in The Caladan Trilogy by New York Times bestselling authors Brian Herbert and Kevin J. Anderson.

Leto Atreides, Duke of Caladan and father of the Muad’Dib. While all know of his fall and the rise of his son, little is known about the quiet ruler of Caladan and his partner Jessica. Or how a Duke of an inconsequential planet earned an emperor’s favor, the ire of House Harkonnen, and set himself on a collision course with his own death. This is the story.

Through patience and loyalty, Leto serves the Golden Lion Throne. Where others scheme, the Duke of Caladan acts. But Leto’s powerful enemies are starting to feel that he is rising beyond his station, and House Atreides rises too high. With unseen enemies circling, Leto must decide if the twin burdens of duty and honor are worth the price of his life, family, and love.

"The audio version is an easy listen. The quick, action packed chapters are well performed, and as the disparate story lines begin to come together it's hard to press pause. Narrator Scott Brick's deep and interesting voice adds more pull to the quieter parts of the story...All in all, a fun book and a great performance." -- Booklist

Brian Herbert: BRIAN HERBERT, the son of Frank Herbert, is the author of multiple New York Times bestsellers. In 2003, he published Dreamer of Dune, a moving biography of his father that was nominated for the Hugo Award. His other novels include Man of Two Worlds (written with Frank Herbert), Sudanna Sudanna, and The Little Green Book of Chairman Rahma.|||KEVIN J. ANDERSON has written dozens of national bestsellers and has been nominated for the Hugo Award, the Nebula Award, the Bram Stoker Award, and the SFX Readers' Choice Award. His critically acclaimed original novels include the ambitious space opera series The Saga of Seven Suns, including The Dark Between the Stars, as well as the Terra Incognita fantasy epic with its two accompanying rock CDs. He also set the Guinness-certified world record for the largest single-author book signing.