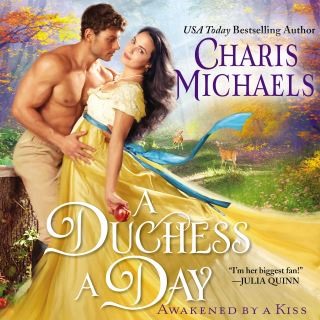 A Duchess a Day

USA Today bestselling author Charis Michaels enchants with her Awakened by a Kiss series, taking our favorite fairy tales' forgotten characters and making them the hero of their own story.

An heiress with a plan…

Lady Helena Lark has spent years trying to escape her wedding to the vain and boring Duke of Lusk. She’s evaded, refused, even run away. When her family’s patience runs out, they pack her off to London to walk down the aisle. But Helena has another idea: find a more suitable bride to take her place, even if she must look for a replacement duchess every day.

A bodyguard with a job to do…

Declan Shaw, better known as “The Huntsman,” is a mercenary who can pick and choose his clientele. After his last job, escorting a young noblewoman to France, landed him in jail under false accusations, he wants nothing to do with aristocrats or women. But the law isn’t done with him, and if he agrees to babysit a duke’s errant fiancé, the payout could make his legal troubles go away.

A most unexpected alliance…

When their worlds collide, Declan realizes that containing his new client is only slightly harder than keeping his hands off her. Helena senses an ally in her handsome new bodyguard and solicits his help. Together they must escape the forces that oppose them and fight for the fairy-tale love they desire.

USA Today bestselling author Charis Michaels is thrilled to be making her debut with Avon Impulse. Prior to writing romance, she studied Journalism at Texas A&M and managed PR for a trade association. She has also worked as a tour guide at Disney World, harvested peaches on her family’s farm, and entertained children as the “Story Godmother” at birthday parties.

She has lived in Texas, Florida, and London, England. She now makes her home in the Washington, D.C.-metro area. Visit Charis at www.CharisMichaels.com.