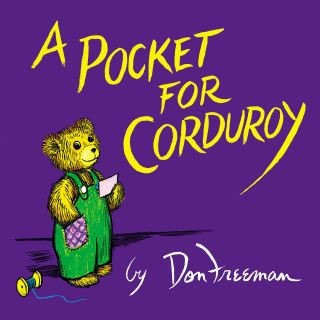 A Pocket for Corduroy

2018 marks the 50th anniversary of Corduroy, Don Freeman's story of a beloved teddy bear and his friend Lisa, which has sold millions of copies and delighted children all over the world. In this sequel to Corduroy, Lisa takes her toy bear to a Laundromat, where he goes on a soapy adventure!

Don Freeman: Don Freeman (1908–1978) was the author and illustrator of many popular books for children, including Corduroy, A Pocket for Corduroy, and the Caldecott Honor Book Fly High, Fly Low. During his career as an artist, sketching impressions of Broadway shows for the New York Times and The Herald Tribune, he was introduced to the world of children’s literature when William Saroyan asked him to illustrate several books. Soon after, he began to write and illustrate his own books, a career he settled into comfortably and happily. Through his writing, he was able to create his own theater: "I love the flow of turning the pages, the suspense of what's next. Ideas just come at me and after me. It's all so natural. I work all the time, long into the night, and it's such a pleasure. I don't know when the time ends. I've never been happier in my life!" He created many beloved characters in his lifetime, perhaps the most beloved among them a stuffed, overall-wearing bear named Corduroy.

Bahni Turpin is a Los Angeles–based audiobook narrator and actress with many television and film credits. Bahni is a two-time Odyssey Award winner and a two-time recipient of the Audie Award for Best Solo Female Narration. She was named an Audible Narrator of the Year in 2016, and The American Library Association’s Voice of Choice for 2017, and in 2018 she was inducted into the Audible Hall of Fame. Bahni is also an ensemble member of Cornerstone Theater Company in Los Angeles.