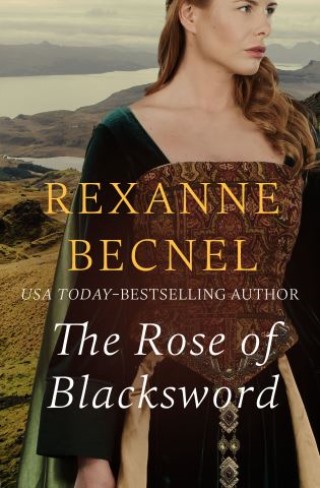 The Rose of Blacksword

A desperate lady engages in a unique contract to gain an escort home in this medieval romance by the USA Today–bestselling author of Thief of My Heart.

It is a dangerous time for a woman to travel alone in England. That is why young Lady Rosalynde of Stanwood has an entourage of knights with her as she urgently returns home to her father. But when a gang of thugs attacks, she is forced to flee and search a nearby town for help. Although she finds a suitable escort, he is also an alleged criminal known as “Blacksword.” The only way she can now ensure herself a safe journey home is to save the scoundrel by handfasting him . . .

Temporary marriage or no, Sir Aric of Wycliffe has better things to do than accompany some nymph through the woods. He has pledged revenge against those who wronged him but has also given his heart to this woman with a sacred vow. When he discovers Rosalynde is her father’s only heir, the thought of making their marriage permanent does cross his mind. But even a towering hulk of a man like Aric can be undone by the greatest conqueror of all: an irresistible, passionate love.

“This is a great story, well told—a page turner. . . . Lots of action, mystery and adventure with an exciting ending. I recommend it.” —Regan Walker, author of the Agents of the Crown series

Rexanne Becnel:
Rexanne Becnel is the author of more than twenty historical romance and contemporary mainstream novels, many of which appeared on the USA Today bestseller list. With the publication of her first novel, My Gallant Enemy, Becnel won the Waldenbooks Award for Best First-Time Romance Author and the Romantic Times Award for Best Medieval Romance by a New Author. While growing up, Becnel lived for a time in Germany and England, where she became fascinated by medieval history. After studying architecture at the University of Southwestern Louisiana, she worked as a building inspector for the Vieux Carré Commission, the agency of the City of New Orleans charged with protecting and preserving the distinct architectural and historic character of the French Quarter. Becnel lives in New Orleans with her husband and two children.