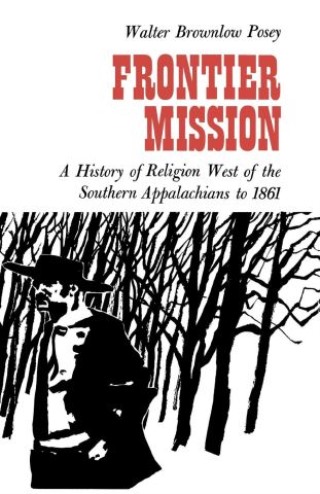 A History of Religion West of the Southern Appalachians to 1861

Religion is viewed here as the great cultural force which introduced and preserved civilization in the era of westward expansion from 1776 to the eve of the Civil War. In this first major study of religion in the South, Mr. Posey surveys the work of the seven chief denominations—Methodist, Baptist, Presbyterian, Disciples of Christ, Cumberland Presbyterian, Roman Catholic, and Protestant Episcopal—as they developed in the frontier region that now comprises the states of Kentucky, Tennessee, Alabama, Mississippi, Louisiana, Texas, Arkansas, and Missouri.

The great challenges faced by the churches, Mr. Posey believes, were, first, the barbarism continually threatening a people isolated in a savage wilderness and, second, the materialism likely to engross minds preoccupied with the hard necessities of frontier survival. Many frontiersmen who had wandered across the mountains to escape the trammels and restrictions of an established society were distrustful of traditional religion, and some forgot their inherited beliefs entirely. To overcome these attitudes demanded new approaches.

As organizations the churches faced great obstacles in attempting to minister to the folk on the moving frontier. One early answer was the camp meeting, and many of its features—an emphasis upon fervid emotion and individualism and the active participation and use of untrained people in religious services—continued as dominant elements in frontier religion. Indeed, those churches flexible enough to make use of these appeals were the most successful in spreading their beliefs. But inherent in the emotion and individualism was the danger of fragmentation, a danger most tragically evident when the slavery controversy split most southern denominations from their northern brethren. In education the churches fared better; even those that were at first skeptical of its benefits were by the time of the Civil War actively engaged in its support. But overall, the southern churches were hampered by too little money for the support of priests and preachers, too little communication between isolated congregations, and too little regard for service to the community.

At the center of the churches' work—the care of congregations, the missions to the Indians and the Negroes, and the founding of educational institutions—were the frontier ministers. Mr. Posey pictures these men—stern and hard but full of zeal—as performing a stupendous task in their efforts to build and maintain spiritual life on the southern frontier.

Walter Brownlow Posey: Walter Brownlow Posey is chairman of the history department of Agnes Scott College and professor of history at Emory University. For many years before 1943 he taught at Birmingham–Southern College, which has since honored him with an L.H.D. degree. Mr. Posey holds a Ph.B. degree from the University of Chicago and a Ph.D. degree from Vanderbilt University. He is president (1958) of the Southern Historical Association. Mr. Posey’s earlier books are The Development of Methodism in the Old Southwest, 1783–1824 and The Presbyterian Church in the Old Southwest, 1778–1838.