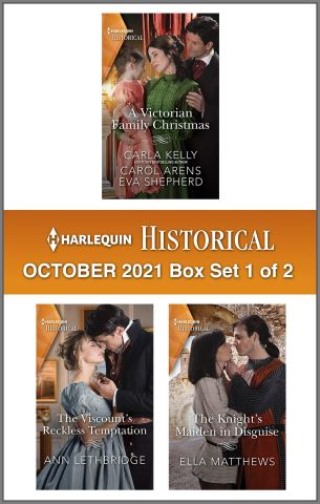 Do you dream of wicked rakes, gorgeous Highlanders and muscled Viking warriors? Harlequin® Historical brings you three new full-length titles in one collection!

Cozy up this Christmas with three heartwarming stories! Widow Lissy gives refuge to a handsome stranger, a captivating woman charms single father Hugh under the mistletoe and an unexpected guardianship to twins has the Earl of Summerhill drawn to their governess…

Marcus, Viscount Thorne, believes Lady Cynthia plans to ruin his cousin’s marriage hopes. So he intends to tempt Cynthia away with his own reckless play for her affections…but ends up tempted by her!

Avva disguises herself as her late brother to keep her family safe. When brave Sir William arrives in town asking for her help, she must reveal her true identity. Dare she trust the knight?

Carla Kelly: I started writing Regencies because of interest in the Napoleonic Wars. I like writing about warfare at sea and ordinary people of the British Isles, rather than lords and ladies. In my spare time I like to read British crime fiction and history, particularly the U.S. Indian Wars. I currently live in Utah. I'm a former park ranger, and double Rita Award and Spur Award winner. I have five interesting children and four grands. Favorite authors include Robert Crais and Richard Woodman.|||Carol lives with her real life hero and husband, Rick, in Southern California where she was born and raised. She joined Romance Writers of America where she met generous authors who taught her the craft of writing a romance novel. With the knowledge she gained, she sold her first book and saw her life-long dream come true. She enjoys hearing from readers and invites you to contact her at Carol Arens on Facebook.|||After graduating with degrees in history and political science, Eva Shepherd worked in journalism and as an advertising copywriter. She began writing historical romances because it combined her love of a happy ending with her passion for history. She lives in Christchurch, New Zealand, but spends her days immersed in the world of Victorian England. Eva loves hearing from readers and can be reached via her website evashepherd.com and her Facebook page Facebook.com/evashepherdromancewriter.|||Ann Lethbridge majored in history and business. She always loved the glamorous, if rather risky, Georgians and in particular the Regency era as drawn by Georgette Heyer. It was that love that prompted her to write her first Regency novel in 2000. She found she enjoyed it so much she just couldn’t stop! Ann gave up a career in university administration to focus on her first love, writing novels and lives in Canada with her family. Visit her website at: www.annlethbridge.com|||