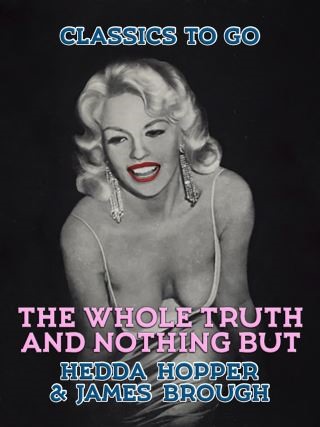 The Whole Truth and Nothing But

From the dawn of the studio system to the decade it all came crashing down, Hedda Hopper was one of the Queens of Hollywood. Although she made her name as a star of the silent screen, she found her calling as a gossip columnist, where she had the ear of the most powerful force in show business: the public. With a readership of 20,000,000 people, Hopper turned nobodies into stars, and brought stars to their knees. And in this sensational memoir, she tells all. (Goodreads)

Hedda Hopper: Hedda Hopper (born Elda Furry; May 2, 1885 – February 1, 1966) was an American gossip columnist and actress. At the height of her influence in the 1940s, her readership was 35 million. A strong supporter of the House Un-American Activities Committee (HUAC) hearings, Hopper named suspected communists and was a major proponent of the Hollywood blacklist. Hopper continued to write gossip until the end of her life, her work appearing in many magazines and later on radio. She had an extended feud with another gossip columnist, arch-rival Louella Parsons.